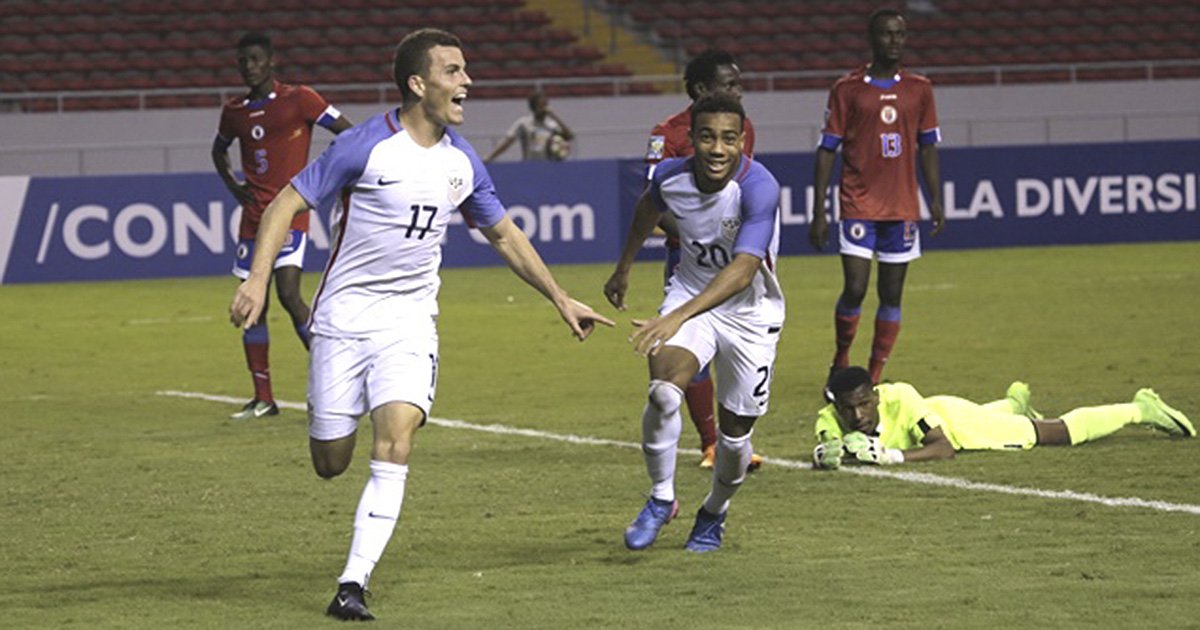 Just 15 minutes into a pivotal CONCACAF U-20 World Cup Qualifying match, the U.S. U-20 Men's National Team found themselves with their backs against t

Just 15 minutes into a pivotal CONCACAF U-20 World Cup Qualifying match, the U.S. U-20 Men’s National Team found themselves with their backs against the wall.

Haiti, who crushed Saint Kitts and Nevis, 5-1, in its opening match, caught the U.S. in transition and went up a goal on a circus shot inside the box. The U.S. U-20’s, needing all three points to keep their U-20 World Cup chances alive, bounced back and equalized in the 28th minute and then added three goals in 13 minutes in the second half to roll to a 4-1 victory.

After the U.S. went down a goal early, the team responded well enough to fight off any more Haitian chances. The break came 13 minutes after the goal when Erik Palmer-Brown played a through ball to Jonathan Lewis, who was taken down from behind just inside the box. Liverpool’s Brooks Lennon (currently on loan with Real Salt Lake) stepped up and calmly converted the penalty. WATCH

Seven minutes into the second half, San Diego’s, Luca de la Torre scored the go-ahead goal when Haiti’s goalkeeper ran off his line to punch a corner out. Unfortunately for him, the ball landed at the feet of Torre, who fired a screamer through traffic and into the back of the net (WATCH). Lennon then added another goal just a minute later when he unmarked collected a ball on the right side and finished inside the box (WATCH). He completed his hat-trick in the 58th minute when Torre’s shot from outside the box was originally saved. Lennon continued his run into the box and followed up the rebound with the U.S U-20’s fourth goal (WATCH).

The U-20 MNT closes out the group stage of the 2017 CONCACAF U-20 Championship on Friday, Feb. 24 when they take on St. Kitts and Nevis. Kickoff from Estadio Ricardo Saprissa in Tibás, Costa Rica is set for 3:30PM PT and the match can be seen live on the CONCACAF Facebook Page. The match follows the Panama-Haiti contest, which will dictate the result the USA needs against St. Kitts and Nevis in order to advance to the Classification Stage.