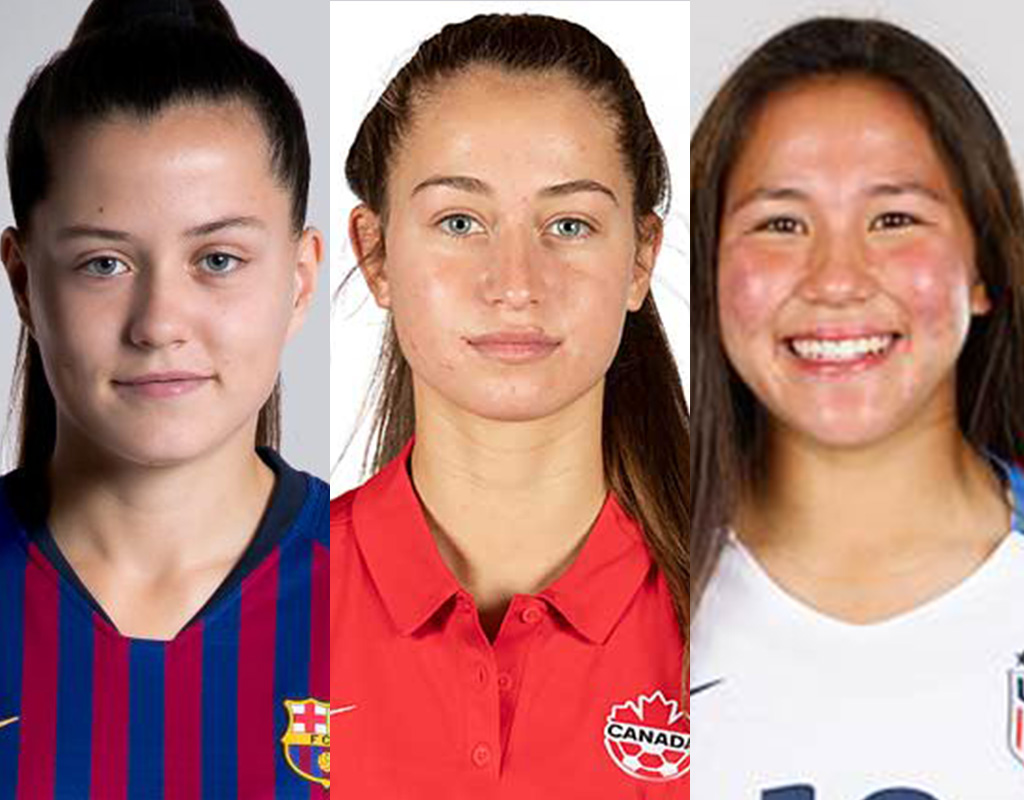 “Talent is Overrated.” A Comparison of Three of the World’s Top GU17 Strikers

At the time of this article's original publishing, the 2019 FIFA Women's World Cup was less than 100 days away. The US Women's National Team (USWNT)

Why ISIS Declared War on Soccer
ICC Futures Update: LAFC Slammers to Face Barcelona in Semi-Final Sat Dec14
Around the World with a Six Pack

At the time of this article’s original publishing, the 2019 FIFA Women’s World Cup was less than 100 days away. The US Women’s National Team (USWNT) will be fighting to defend their world title and earn their fourth star. An easy path to the final does not exist. While the rest of the women’s soccer world has been catching up to America, the spotlight on youth development in the USA has been growing brighter by the day. The youth soccer landscape in America is fractured and extremely diverse. Mirelle Van Rijbroek, director of Talent Identification, is in charge of the US Soccer team tasked with making sure the best female American soccer talent is identified and placed in the best environment for each player’s development.

Van Rijbroek was at last year’s FIFA U-17 Women’s World Cup in Uruguay. She had a front row seat to witness the results of other countries’ youth development. Whenever I speak with her, Van Rijbroek is very clear that the goal of the US Youth National Teams is not to win World Cups but to develop individual players. “Our main goal for youth teams is to accelerate, develop, and inspire players to their full potential. And to give them international experience. It’s not win-at-all-costs for the US at the youth level.” Because of this emphasis on development over winning, USA’s group round departure from the U17 World Cup was not seen as a defeat. The global view of female youth development, however, was very enlightening for Van Rijbroek.

Van Rijbroek elaborates, “Most other top soccer nations, European and Asian, have a single playing model. Women’s professional leagues are forming and getting stronger. Players as young a U-17 and U-20 have a platform for top competition, high performance environments, and quality training. Many young players I saw at the U-17 World Cup already play in the highest pro women’s league of their country or are in a residency program — a high-performance program with national curriculum and international standards.”

Comparing the youth development of three countries’ strikers, Van Rijbroek came away from the U-17 World Cup with a renewed determination. She wants to make sure the best American talent is being developed to the full potential. “Talent is overrated. You are not born with world-class soccer talent,” she says. “High-level talent is not something innate and it is not fixed. You have to develop it every day. The performance environment, how much you learn and how challenged you are daily, is just as important. Maybe even more so. Look at these two strikers from around the world and their development and environment. They have coordinated talent development systems that will maximize the potential of exceptional young players.”

Clàudia Pina of Spain was awarded the Golden Ball (best player)for the Women’s U-17 World Cup. She is undoubtedly a future star of women’s soccer. Van Rijbroek explains, “Pina plays for Barcelona Women’s team on the women’s highest professional level, Primera División. [Barca bio] She played in all games for Spain last summer at the U-20 World Cup. Pina is constantly playing with older and professional players. Look at her environment — daily professional club environment, the number of high-level training sessions every week, her high performance program, high level coaching, year-round program and competition. Because of her daily environment and the international experience, Pina has been able to accelerate her development and growth faster.”

I am more than excited to officially announce my signing with @psg_feminines #icicestparis ??

In 2018, playing up, Huitema won the Golden Boot at the CONCACAF U-20 Women’s Championship. She recently decided to go pro instead of playing college soccer. Van Rijbroek explains, “Huitema already made several appearances for the Canada’s Senior National team. She played for Vancouver Whitecaps in Canada’s EXCEL program [Canada’s program for exceptional female players] and recently signed for PSG. Huitema is in a professional environment that develops her talent every day. There are only a few of these programs in the entire country. Women’s Regional EXCEL Centers provide the most talented female players with a year-round, comprehensive program based on the standardized national curriculum. It [EXCEL] looks more like a residency program. EXCEL is licensed by Canada Soccer and delivered through the Provincial and Territorial member associations and partners — clubs like Vancouver Whitecaps, for example.”

Van Rijbroek describes Fontes’s youth development: “Sunshine played her first World Cup at the U-17 World Cup. She plays on Hawaii Rush in a USYS youth league, and she plays high school soccer. Sunshine is considered to be one of the best American forwards in her age category [U-17]. She has enormous potential. Her youth development is so different from the other top strikers in the world. Imagine if Sunshine would have been in the same environment as Pina. Certainly, you don’t need to have any imagination to understand what kind of impact the environment has on the further development, growth of those players and eventually future performance. If she is going to realize her full potential and perform on the international level, that has everything to do with the decisions she makes, the opportunities she gets, and her own goals and ambitions.”

“The pathway to international success must involve the meticulous and systematic development of young players. Evidence from world-leading soccer nations has shown the importance of coordinated talent development systems that maximize the potential of a country’s most exceptional young players. Key themes are: Increased training hours, quality of training, level of coaching, a program which has a focus on technical and tactical perfection, and a drive to develop the whole player from an holistic perspective — technical, physical, mental, and social/emotional. Only a comprehensive player development process — one that starts with a player’s love of and hunger for the game and ends on the international stage —- will lead to a nation’s steady development of world-class players and sustained success.

If the USA wants to remain dominant on the global stage of Women’s Soccer, top American youth players need to be, and they need to WANT TO BE, in environments that will allow them to develop. Talent isn’t enough any more. Comparison of those three players makes this so clear. Environment and experience make such a huge impact on players’ current performances, players’ future development, and the future of US Soccer.”