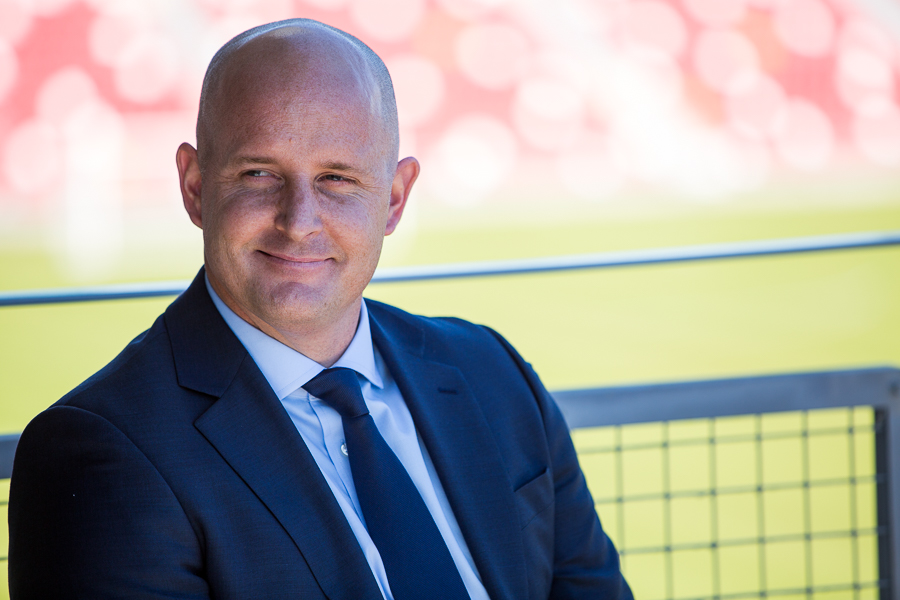 On Sunday, New York Red Bulls II will face Swope Park Rangers in the USL Cup Final (5 pm PT, ESPNU). With the end of the 2016 season drawing near, Soc

San Diego Will Be a Lot Less Flashy in 2016
MLS Expansion Quest Power Rankings
At Long Last San Diego Has an NASL Team – Now What?

On Sunday, New York Red Bulls II will face Swope Park Rangers in the USL Cup Final (5 pm PT, ESPNU). With the end of the 2016 season drawing near, SoccerNation spoke exclusively to USL President Jake Edwards about the state of the league, the role of California (including the all-important expansion question), player development and the status of the two Southern California teams currently in the USL, Orange County Blues and LA Galaxy II.

First, I’m wondering what the “theme” of the 2016 USL season has been from your perspective. I know attendance is up — is that the big takeaway or defining feature of the league overall this year?

The USL’s 33 percent increase in total attendance for 2016 was certainly one of the League’s biggest accomplishments this year, a testament to our passionate fans across North America. With some 30 teams expected to compete in 2017, USL has doubled in size since 2014 and is backed by ownership groups in major markets with a cumulative net worth of $4 billion (exclusive of MLS) and stakes in MLB, NBA and NHL franchises. The theme of our season extends to new initiatives: Video Assistant Referee program, the USL Digital Network and USL Productions have all kicked off in 2016 and will improve the game, engage fans in new ways and bring them closer to the USL.

In talking about attendance, it appears the Southern California teams have not made the same gains seen elsewhere. First, with the case of the Orange County Blues, they’ve got new ownership now and are promising big changes moving forward, but where does attendance fit in that equation for them?

Attendance is an important part of a team’s success and what we have found that the proper venue is essential to building a loyal base of supporters. With James Keston we have found a local, committed owner whose goal is to transform the club into a world-class professional soccer organization. His plans include a complete rebranding of the team with significant fan input, a dramatically improved game day experience in a new stadium with up to 10,000 seats, a first-class soccer academy for nurturing Orange County’s most talented youth players near their own communities, partnerships with a variety of clubs both domestic and international, and close links between the professional club and the community of Orange County, including fan interaction and charitable activities. Both James and the League see this as a recipe for success in Southern California.

And then there’s LA Galaxy II, whose attendance appears to be increasing incrementally but aren’t bringing in giant numbers. I’ve spoken with you before about the evolution of how to approach marketing and off-field goals for the MLS-owned teams, and I’m wondering what the next step will be for those sides, like LA Galaxy II, as they mature as USL teams.

USL has confirmed itself as the most competitive professional soccer league in North America under Major League Soccer and the results are showing. As you mentioned, MLS-owned USL clubs like LA Galaxy II have experienced increased attendance and our organization is committed to growing awareness in local and regional communities for all of its teams. It is more challenging for these clubs to build a fan base for the Second Team within the same market but some will continue to invest to see incremental growth and others may explore other affiliate with us.

I’m sure every interview you do these days mentions expansion, and I have to ask about it here. First, for our local audience, there have been rumors about San Diego getting a USL team. Can you comment on that? Is the league seriously considering expansion to San Diego, and if so, is there a general timeline on the project?

San Diego is a thriving market with a millennial population, considerable interest in soccer and high participation levels. We have received numerous expressions of interest from very credible groups and will continue to explore options in the market based on our three core tenets: strong local ownership, an attractive market and plans for a soccer-specific stadium.

Furthermore, we know LAFC will be entering MLS in 2018, and club leaders have said they considered starting a USL team next year but ultimately decided against it. What are your thoughts about LAFC’s early interest in USL? And would you have a preference if the team became an LAFC 2 team or sought slightly distinct branding from the MLS club?

We have had discussions with LAFC but with the amount of work they have to do between launching the team, an academy and building its stadium it doesn’t make sense to attempt a USL club right away. The discussions we did have centered on a distinct brand for any potential second team.

USL, of course, also includes the PDL and Super Y League as part of the overarching organization. I’m wondering if there is a similar smoke-to-fire trend brewing between PDL and USL teams as there seems to be between USL and MLS organizations. If so, is that a deliberate correlation or has that just come about naturally? Where does the USL’s Super Y League feature in the equation of building out the United Soccer League into a truly national league?

Both the PDL and Super Y League will continue to have relevance in the USL development pyramid.

The PDL featured 67 teams within four conferences throughout the United States and Canada in 2016, including 10 teams affiliated with USL or Major League Soccer clubs. The PDL has proven to be an important stepping-stone for top professionals now playing throughout the world, with 70 percent of all MLS draftees having PDL experience. Nearly 300 former PDL players competed during the 2016 USL season.

Introduced in 2016, the Super Y League’s USL Experience, an event unlike any other elite youth player program in North America, starts in the regular season. Players will then participate in Regional Scouting Series Events before being named to the SYL National Player Pool. The top players from the National Player Pool will then be chosen to take part in the USL Experience. The second edition of the elite multi-day residential event will be hosted by San Antonio FC in April of 2017.

I would be interested to hear your thoughts about California and USL overall. There are already three teams here, but it’s a highly populated, soccer crazy state. And it’s a state that produces a lot of elite and professional players. USL is a continental league, but I wonder what special role California specifically plays in the future of the league, whether as fans, players, or something else.

California is a hub for premier soccer in America. The size of the state, its demographic composition and diversity provide a solid foundation and growth opportunity for owners and fans alike. It’s an added bonus that the USL harbors three teams in the Golden State. We are fortunate that this part of the country is so passionate about soccer and firmly believe that it will help expand and grow the game in all facets nationwide. Many great players, coaches and teams from youth, collegiate to the professional levels have come from California. We built our Western division first through anchor club Orange County Blues. That growth has spread north and we have had tremendous success in Sacramento. We are in discussions now with some very impressive ownership groups in several key California markets so expect to see a little more expansion in the state over the next few seasons.