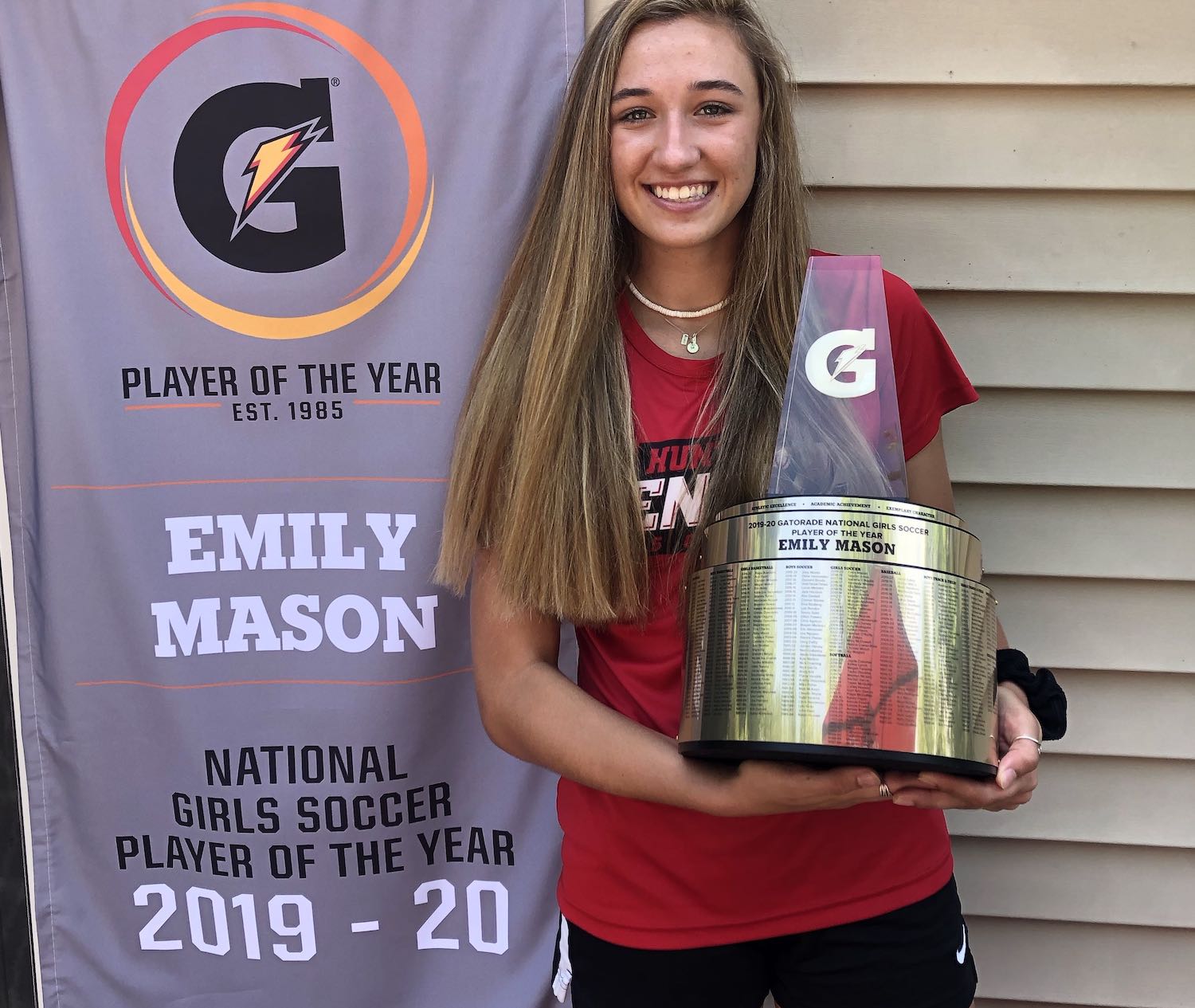 In its 35th year of honoring the nation’s most elite high school athletes, The Gatorade Company today announced Emily Mason of Hunterdon Central Regional High School in Flemington, N.J. is the 2019-20 Gatorade National Girls Soccer Player of the Year. Mason won the prestigious award for her accomplishments on and off the field, joining an impressive group of former Gatorade National Girls Soccer Player of the Year winners who have gone on to have incredible success – they’ve combined for 17 gold medals and eight National Championships

Due to the ongoing situation with the coronavirus pandemic, Gatorade coordinated a virtual surprise, including a video call by Sky Blue FC’s Mallory Pugh to break the exciting news to Mason.

Mason still has a year left of high school as well. Winning the award as a junior speaks to the quality of Mason’s character and her athletic abilities.

In an interview with SoccerNation, Mason said, “I was so surprised! I had no idea this was coming. I’m so honored.”

“I’ve become really good friends with girls [on my high school team] that I would never have met in my normal life.”

While chatting with Mason, the current COVID-19 situation came about. Mason, wise beyond her years, explained, “High school soccer and high school sports are so important. It’s really cool that Gatorade sees how important high school sports are. In my high school, there are those ‘cliques’ like every high school has, of course. But on the soccer team, I’ve become really good friends with girls [on my high school team] that I would never have met in my normal life. We’re so diverse, and so welcoming and loving, and now we’re family. It’s a family. The world needs more of that, not less. Plus, kids need to stay active. They need stuff to do, to keep them active and busy. Sports need to come back very soon. High school sports make the world a better place.”

“Emily Mason is relentless,” says United States U-20 Women’s National Team assistant coach Heather Dyche. “The game doesn’t faze her. She doesn’t go through any high highs or low lows. If you’re in a tie game, she’s saving balls off the line. If you’re up 3-0, she’s saving balls off the line. She was the youngest player on our team by far at the 2020 CONCACAF tournament and she really held her own. Emily has an incredibly bright future. She’s a great kid, too.”

A participant in the Hunterdon Outreach Program supporting special needs children through athletics, Mason has volunteered locally on behalf of the Saint Elizabeth Ann Seton Church, including mentoring in the church’s Children’s Liturgy of the Word initiative. “Emily Mason is the best player we played against all season,” said Kevin Ewing, head coach of Scotch Plains-Fanwood High School. “We faced them twice and each time she was a major reason we could not do much offensively. She is physically dominating on the field and has a good first touch and excellent field vision.”

Mason has maintained a B average in the classroom. She has made a verbal commitment to play soccer on scholarship at Rutgers University beginning in the fall of 2021.

When asked about her commitment to Rutgers, Mason replied, “I love the family feeling there. The minute I came on campus, I knew that was where I belonged. The staff is amazing. The culture they create is so great. I got to meet Carli Lloyd on one of my trips there, too, which was awesome. They’re such a great program.”

Speaking of recruiting and high school soccer, SoccerNation also spoke with Mallory Pugh a few hours after her surprise video chat with Mason. Pugh told SoccerNation families, “Gatorade knows how important high school sports are. So does ECNL. They both place such a high value on the whole person, not just sports. I remember my ECNL days so well. ECNL was a great place to grow my game and really improve as a soccer player and as a person. The showcases and tournaments they put on are so great. Then, when I had the chance to go play for my high school, sure, the soccer was different. But that was so important for my development as a player, too, and as a person. Learning to quickly adapt to different coaching, different styles of play, with different teammates. It all made me better.”

“Even with many sport seasons canceled or cut short this year due to the coronavirus pandemic, we are continuing to honor incredible student-athletes like Emily Mason through our Gatorade Player of the Year program,” said Gatorade Senior Vice President and General Manager Brett O’Brien. “Mason rose to the top of our list of nearly a million student-athletes who play girls soccer due to her athletic performance, success in the classroom and devotion to her community.”

Since the program’s inception in 1985, Gatorade Player of the Year award recipients have won hundreds of professional and college championships, and many have also turned into pillars in their communities, becoming coaches, business owners and educators. Previous winners include a distinguished list of athletes, such as Peyton Manning, Abby Wambach, Karl-Anthony Towns, Derek Jeter and many other sports icons. To learn more about the Gatorade Player of the Year program, check out past winners or to nominate student-athletes, visit www.Gatorade.com/POY, on Facebook at www.facebook.com/GatoradePOY or follow us on Twitter at www.twitter.com/Gatorade.

Congratulations, Emily, from all of us at SoccerNation. We’ll be following along as you finish out high school and head to Rutgers!

Loading...
Newer Post
This Week from Olympus Movement: All You Need to Know about Cupping Therapy
Older Post
ALL SD Loyal Players test NEGATIVE for Covid-19