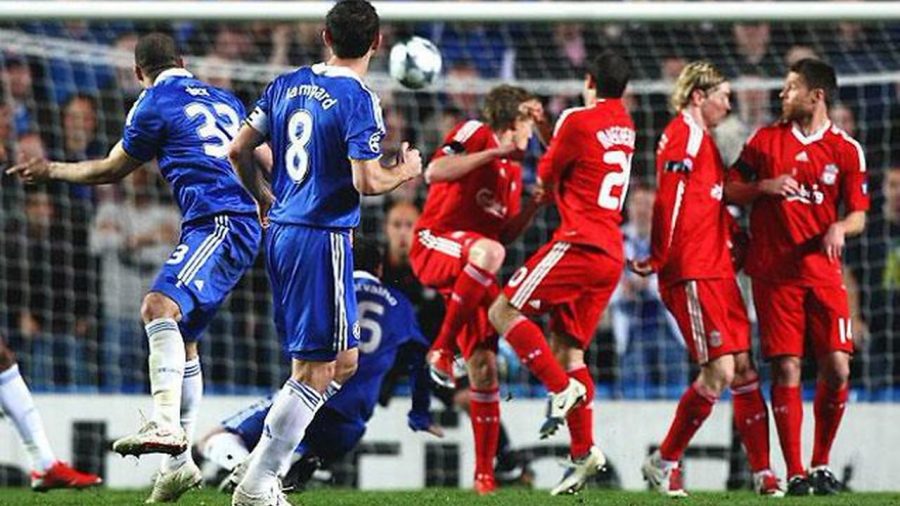 The Best Liverpool – Chelsea Clashes of the New Millennium: Part 2

With Liverpool and Chelsea bound for Southern California, and set to square off in an International Champions Cup match at the Rose Bowl on Wednesday,

With Liverpool and Chelsea bound for Southern California, and set to square off in an International Champions Cup match at the Rose Bowl on Wednesday, Soccer Nation’s Nate Abaurrea took a glorious trip down memory lane. Here is the second installment of his top Liverpool – Chelsea moments of the new millennium ordered chronologically from 2000-2016, a span that has seen some of the most memorable clashes in the history of the Merseyside v. London match-up.

In the tenth meeting in two seasons between Liverpool and Chelsea, it was a trip to the most ironic of venues, the house of a mutual rival. Old Trafford opened its doors on this Saturday afternoon with each side vying for a spot in that season’s FA Cup Final, the last to be held at the Millennium Stadium in Cardiff. In the previous nine matches between the two sides, Liverpool had won just once, the famous 1-0 victory in the prior season’s Champions League semi-final.

Didier Drogba missed a golden opportunity to put the Blues ahead early, and just moments later, John Arne Riise placed an exquisite curler into the bottom corner from a free-kick just outside the Chelsea box. The Spaniard who had scored the “ghost goal” almost a year earlier, Luis Garcia, showed Chelsea fans that he could also bury them in the back of the net, an incredible left footed volley over Carlo Cudicini midway into the second period, doubling Liverpool’s advantage. Garcia nearly made it 3-0, but was thwarted by Cudicini. A calamity at the back for the Reds saw Didier Drogba loop a header over Pepe Reina to make the score 2-1, creating quite the squeaky bum time in Manchester. Despite the late scare, Liverpool held on, knocking Chelsea out of the cup and booking a ticket to Cardiff, where they went on to beat West Ham on penalties after one of the most enthralling finals in recent history, a 3-3 scoreline remembered mostly for the heroics of Steven Gerrard.

Almost two years to the day of the 2005 Champions League Semi-Final 2nd leg at Anfield that saw Liverpool break Chelsea hearts, the two sides matched up again, in almost identical circumstances. This time around, Joe Cole had given Chelsea a 1-0 aggregate advantage from the first half of the tie at Stamford Bridge. Daniel Agger’s sweet first time finish off an assist from Steven Gerrard cancelled that lead out, and eventually saw this game go to extra time, and ultimately a penalty shootout.

Pepe Reina was at the end of his second season at Liverpool. This night was the one when he truly became a Red, saving two of the three penalties he faced, as Liverpool put all four of theirs past Petr Cech, Dirk Kuyt with the clincher to end the shootout at 4-1. Jose Mourinho shook Rafa Benitez’s hand almost in disbelief. Sadly for Liverpool, they could not fully replicate their 2005 triumph, though they had quite the chance at a carbon copy. It was AC Milan who enacted revenge, beating the Reds 2-1 in the final in Athens.

For the third time in four seasons, a home and home tie between Chelsea and Liverpool would decide one of the spots in the Champions League Final. However this time around, it was Chelsea getting to play the second leg at home, and that advantage proved to be vital. Liverpool looked destined to take a 1-0 aggregate lead to the Bridge after out playing the Blues at Anfield, but a late own goal from John Arne Riise (heading into his own net with no real pressure on, a moment that still makes Liverpool supporters cringe) made the score 1-1.

Didier Drogba put Chelsea 1-0 up on the night, and 2-1 on aggregate, a ferocious strike off a rebound after Pepe Reina had made a great save against Salamon Kalou. Fernando Torres, in the form of his life, tied the scores twenty minutes into the 2nd half after a cheeky bit of skill from Yossi Benayoun. The score stayed level, sending the match to extra time.

Something happened when extra time began. Chelsea were determined. It was clear as day. The dark spring night was to belong to the Blues, but there was still plenty of chaos to ensue.

After Michael Essien blasted one home to seemingly give Chelsea the lead, a raucous celebration followed, and it wasn’t until almost thirty seconds later when the Chelsea players and fans had realized the flag had been raised, Didier Drogba ruled to have interfered with the sight-line of Reina from an offside position as the shot came in. That was Liverpool’s lifeline.

Just moments later, Sami Hyypia made a clumsy challenge on Chelsea’s Michael Ballack, just inside the eighteen yard box. It was a stonewall penalty, and Frank Lampard made no mistake with it, sending Reina the wrong way and sending Chelsea in front.

Didier Drogba made it 3-1 with a close range finish, and it looked like Liverpool were cooked, Chelsea finally snapping what some were calling a “curse” against Liverpool in Europe. It got nervy though, as extra-time substitute Ryan Babel blasted Liverpool back to 3-2 down, a strike from well over thirty yards that Petr Cech got both hands to but was only able to parry to his right side, watching in disgust as it snuck inside the post. If the Reds had been able to score once more, they would have advanced on away goals. That goal never came, and it was Chelsea who moved on to Moscow, an all-English Champions League Final clash with Manchester United awaiting them. That’s a game that will always slip into the devious mind of John Terry.

It was so theatrical. The day began with a flaky snow fall on Merseyside, combining with the spine tingling choir of the Kop and the rest of Anfield to create an almost surreal setting.

The match stayed deadlocked, 0-0, until the dying minutes, Petr Cech putting on a goalkeeping clinic in the process. But it was two late goals from the Spanish wizard tat settled the outcome, “El Nino” in full effect. His celebration of the first was as perfect as it was hilarious, crossing his legs and arms like a genie. The timing of the second was equally beautiful, the stadium in full voice as their star forward put the game on ice. 2-0 to the Reds, a firm statement to the rest of the Premier League that Liverpool were a force to be reckoned with. Chelsea however would get the last laugh in 2009, at least when it came to the head-to-head match-up with their Scouse rivals.

You can hardly do this night justice when talking about it among mates at the pub, or writing about it on websites and in journals. It is one of those tales that gets bigger and bigger with every passing year.

It was Chelsea and Liverpool, matched up in a home & home tie in the Champions League for the third time in four years, the prior two being in the semi-final round. It was Chelsea who looked to be in cruise control, winning the first leg at Anfield 3-1, a night some refer to as the “Branislav Ivanovic Show”, the Serbian defender netting a brace, his first two goals in his first two seasons at the Chelsea.

Liverpool knew they had to score at least three goals to advance, and when Fabio Aurelio bated Petr Cech with one of the most audacious free kicks (Aurelio looking he was going to send a deep cross before whipping one low to the near post that Cech had vacated), Liverpool fans got quite hopeful. When Xabi Alonso scored from the penalty spot minutes later, it was game on, the aggregate tied at 3-3, Liverpool still needing one more to advance.

But soon after the half time break, it all came crashing down for the Reds, Pepe Reina fumbling a Nicolas Anelka cross into the goal before Alex hit a stunning rocket of a free kick to make the score 2-2 on the night, and 5-3 to Chelsea on aggregate. The Blues were on a rampage, and then Frank Lampard put home a tantalizing centered ball from Didier Drogba to seemingly put the tie to bed. For goodness sake, Chelsea led 6-3, with ten minutes of regulation remaining!

It should have been over, but Liverpool just didn’t know how to quit. In the 80th minute, Lucas Leiva let loose with a drive from deep that deflected past Cech. 3-3 on the night. 6-4 Chelsea on aggregate. Moments later, Albert Riera did incredibly well to get a left footed cross into the goal mouth, where the ever pesky Dirk Kuyt was waiting to slam it home. The Dutchman put it in. Yossi Benayoun grabbed the ball and sprinted back to the halfway line, Kuyt quickly making his way to the adjacent Liverpool away section, the supporters rubbing their eyes and pinching their arms to see if it was all real. It was. The comeback kings were at it again. If Liverpool could score one more, they would tie the aggregate at 6-6 and advance on away goals. It was like a fairy tale, all except for the ending.

With Liverpool pressing with everything for one last scoring chance as the match hit the 89th minute, Chelsea countered with a vengeance, setting up Lampard for his second goal of the night, a shot from just inside the box that hit both posts before crossing the line! The great Clive Tyldesly had a memorable line as Chelsea’s fourth goal on the night went in, making it 7-5 on aggregate, the English commentator’s elegant simplicity summing up the feelings in the air. “That should be that,” he said. “that SHOULD be that…”

Despite Liverpool never laying down and continuing to pile on pressure all the way to the final whistle, that was to be all she wrote. Chelsea advanced. Liverpool were knocked out. The collective eye of English and European football flickered, as we all exhaled. Chelsea went on to play Barcelona in the semi-final, defeated by one of the great European moments of all-time, Andres Iniesta’s last gasp equalizer at Stamford Bridge in the 2nd leg. Liverpool, just days after this match were involved in another 4-4 draw, that time to Arsenal, a game that essentially sealed their fate in one of the great Premier League title races.

This was the last time Liverpool and Chelsea met in the Champions League. If they ever meet again, you can be damn sure they’ll be talking about this one in the buildup. It was one of the most entertaining nights of football you’ll ever see.

(Nate Abaurrea will be covering the Liverpool vs. Chelsea match in the International Champions Cup for Soccer Nation, this Wednesday July the 27th at the Rose Bowl in Pasadena.)