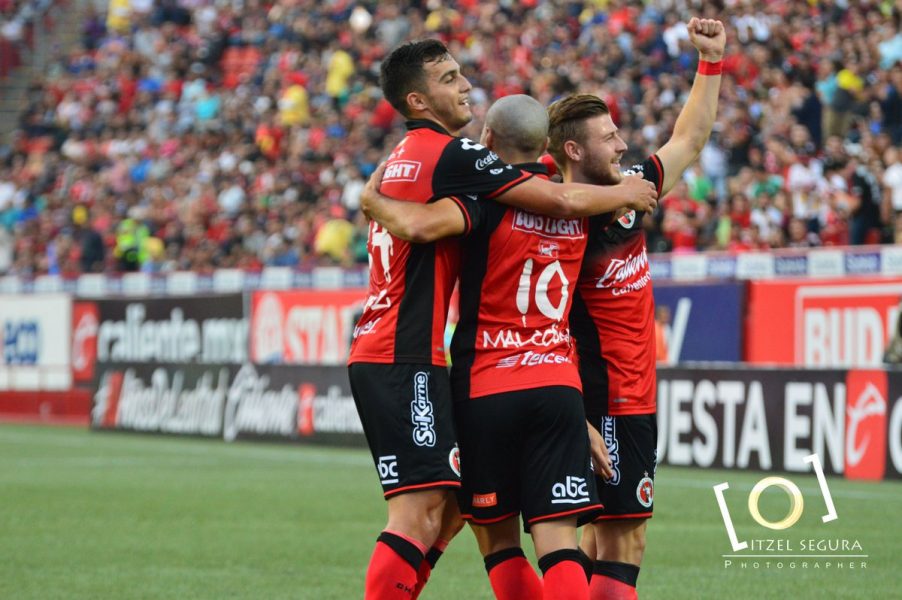 My how fast the soccer world can move. It was less than two weeks ago that Paul Arriola was standing atop a podium, a winner's medal around his nec

My how fast the soccer world can move.

It was less than two weeks ago that Paul Arriola was standing atop a podium, a winner’s medal around his neck as the Gold Cup trophy was placed in his hands amidst jubilant celebrations at Levi’s Stadium in Santa Clara after the United States had defeated Jamaica 2-1 in the final of the continental championship.

Arriola played a key role in helping the United States overcome early tournament jitters and inauspicious displays, the 22 year-old Club Tijuana winger and Chula Vista native certainly grateful to have enjoyed the thrill of triumph in his first major tournament for the national team, a tournament in which he featured quite prominently.

“It was an amazing experience,” Arriola said of Copa Oro 2017 in our latest conversation. “People have talked to me for years about how cool the Gold Cup is, the stories I’ve heard from guys like Joe (Corona) and Michael (Orozco) and others. I was also told for years about how the tournament has been that critical point for so many U.S. players, that way to take it to the next level with the national team. All in all it was really just great to be a part of the team.” 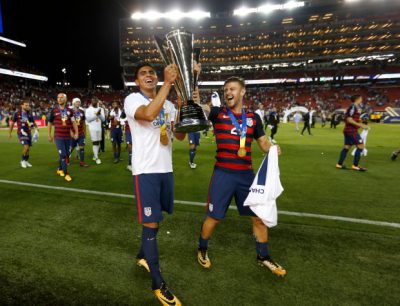 Teammates for club and country, Joe Corona and Arriola lift the Gold Cup together

Arriola spoke of the slog through the group stage and the rocky path to an eventual title.

“In the group stage and even into the quarterfinals, obviously we were a little shaky. We played teams that we knew we should beat, and in most cases, we did beat them. But people thought we should’ve beaten those teams a little more handily, and that’s fine. We made things difficult on ourselves in each of those first four games we played, but we were able to clean things up a bit and really come together as a unit.”

“It definitely helped, being able to bring in some of the more experienced guys in the knockout stages. It made everyone a little more calm, just seeing Michael (Bradley) or Jozy (Altidore) out there with us.”

“As much as I wanted to have a great personal showing on the field, the thing I wanted the most was to win. It was my first trophy as a professional. Honestly, that’s how I want to measure my own playing career, by the trophies I can help my teams win. To be able to get that Gold Cup, it’s a great start.”

During the Gold Cup run, some significant news was made off the field by Arriola. Our interview subject is now an engaged man.

“We’ve been together for seven years,” Arriola said of his now fiancée Ana. “We just bought a house together, and we’ve been moving into it slowly with all the travel we’ve been doing. It’s good to be home a little more now, and with the engagement and our little puppy that we’ve got, it’s like I’ve got a little family of my own now. It’s awesome.”

The very next morning after the victory over the Reggae Boyz, as the last aromatic remnants of Northern California champagne billowed about the American camp, Arriola was on a plane to Aguascalientes, due to join up with the Xolos of Club Tijuana who were already underway with their 2017 Liga MX Apertura campaign.

A 2-0 loss at home to Cruz Azul in the season opener (a match played while Arriola and fellow San Diegan Joe Corona were still on Gold Cup duty for the Yanks) was followed by a 1-0 loss away to Necaxa. With that game being played less than 72 hours after he had started in the Gold Cup Final, Arriola sat on the bench and watched as new manager Eduardo “Chacho” Coudet’s Tijuana side failed to score a single goal for the second time in as many chances.

The young American knew he would see the pitch for the first time in the new season just a few days later, a Tuesday night Copa MX contest at home to Puebla serving as the perfect opportunity for Arriola to get his league legs back under him before a highly touted Monterrey side came to Estadio Caliente that Friday.

“I obviously hadn’t had too many days back home,” Arriola said of his return to Baja and the homeland just north of the frontera. “Joe and I flew straight to Aguascalientes from the Gold Cup. It felt great just to be back and to see our supporters again. We definitely missed them.”

Back in front of the home fans for the first time since Xolos were knocked out of the Clausura Liguilla by Tigres in late May, Arriola received a roaring ovation from the Tijuas locals when the starting elevens were announced. That roar of adoration was amplified and aided by sheer joy moments later, a stunning goal from Arriola in the game’s 7th minute putting Xolos one goal to the good, a 1-0 lead that would ultimately hold to the final whistle. It was quite the way to mark a personal return, and while it wasn’t in the league, it was the first time Xolos fans had a goal or a win of their own to cheer for in a competitive setting this season.

The goal was a sensational headed finish from about fifteen yards out, angled and looped to perfection with just the right mixture of power, placement, and good fortune. Coming off an out-swinging corner kick, a set-play that was practiced a handful of times in the prior day’s training, Arriola made a brilliantly deceiving run that put him in the perfect spot to direct the ball on frame. A well-timed jump and a proper piece of contact resulted in one of the finer headed goals you may see this year.

“We had a couple of corner-kick plays that we went over in training,” said the Xolos goalscorer. “Chacho had asked me if I was comfortable being the guy that one of the plays was designed for, if I could hit one solid. I said ‘don’t worry’ and told him I’d get a hold of one. In that moment against Puebla, the play just opened up perfectly. We had three or four guys in the box who were able to draw everyone out, then back in toward the mouth of the goal, and it just kind of opened things up right in that space where I needed to be.”

“I was supposed to fake to the second post and then bolt right into that space that opened up. I was actually marked well, but it all just worked out perfectly. It’s not often with plays like that where it works out exactly the way you imagined it. And as much as it looks like an individual moment, that was a team goal in the truest sense. I wouldn’t have been able to make that play if everyone else hadn’t done what they needed to do.”

And as for the finish itself?

“I closed my eyes,” Arriola said with a bit of a blush. “That was one of the best headers I’ve ever hit, and I closed my eyes. So, maybe I should close my eyes more often? I don’t know.”

As quick as this beautiful game can lift you up, it can knock you right back down, and kick you a few times for good measure. With fans, players, and coaches alike hoping the 1-0 win over Puebla in the Copa could give Xolos some momentum in the league, it did anything but. Los Rayados waltzed into Estadio Caliente and absolutely thumped Xolos to the tune of 3-0, former Club Tijuana star Aviles Hurtado pouring salt in the wound by netting a brace for Monterrey in his first match back since being transferred earlier this summer.

Boos and cries of "fuera" from nearby #Xolos fans as Eduardo Coudet walked into the tunnel. The struggle is real. #LigaMXeng

Xolos are still yet to score a goal in Liga MX under Eduardo “Chacho” Coudet. They are dead last in the eighteen team table without a point after three match-days, including two home games.

“Our chemistry isn’t where it needs to be right now”, Arriola said after the loss to Monterrey. “I know it’s frustrating for people off the field, and it’s incredibly frustrating for us on the field. We have some new players, a new coach, a new system, and it can take some time for it to all come together. We’ll get it.”

Xolos fans would of course like to see it all come together in the next match, before the pressure on Coudet grows and the cries of “fuera Chacho” become louder.

A glimmer of shiny optimism for Coudet, Arriola, and the Club Tijuana faithful… The next match is away to none other than Puebla, this Friday night, the 11th of August. Arriola has scored in each of his last two matches against Los Camoteros, a cracking volley last January and the exquisite cabezazo in the Copa. To keep that streak going in these circumstances, Xolos fans would surely take a tap in from Chula Vista’s Gold Cup champion.