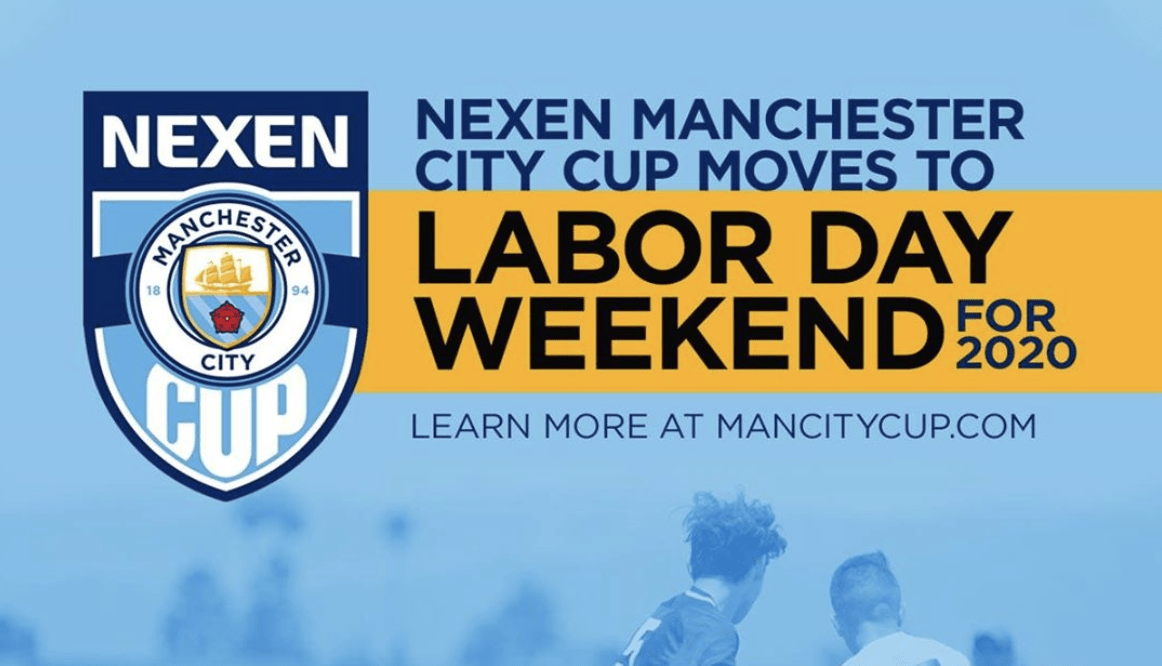 In response to Covid-19, the highly popular and extremely successful Manchester City Cup has been moved to Labor Day weekend for 2020. The change

In response to Covid-19, the highly popular and extremely successful Manchester City Cup has been moved to Labor Day weekend for 2020.

Last year, like the year before, ESPN and Univsion set up their enormous television broadcast semi trucks in the parking lot of the SoCal Sports Complex in Oceanside.

The “International Super Group” youth games were televised to national audiences. Young teams from around the world demonstrated that the future is bright for global football — especially in the US.

According to sources at Surf Sports, Surf Cup 2020 is “Full steam ahead!” Both Youngers and Olders weekends are on schedule, but with the current state of the world, everything is subject to change. For now, though, young soccer players can look forward to Surf Cup this summer!

The Nexen Manchester City Cup has grown over the last five years to be one of the largest and most competitive youth soccer tournaments in the United States. It has become a premier event that brings the best international and domestic talent to San Diego to compete for a coveted title in youth soccer. However, with the current situation regarding COVID-19 and our top priority being the safety of our players and families, Surf Cup Sports and Manchester City Football Club have together decided to move The Nexen Manchester City Cup to Labor Day weekend 2020, play dates will be September 5 – 7, 2020. The tournament will return to its original Memorial Day weekend for 2021.

With these rescheduled dates, the 2020 Nexen Manchester City Cup will continue to shine as an elite youth soccer event featuring boys’ and girls’ teams competing in all age groups from U8s (2013s) to U19s (2002s).  The 2020 event will not feature Super Group brackets due to prior commitments from the international teams and the USSDA league play commitments but will return for 2021.

We are also extremely pleased to announce that because of the rescheduled dates for this year’s event, we are adding Super Group Division Qualifiers in the boys 2007, 2008 and 2009 birth years. This is an incredible opportunity for the top, most competitive non-DA teams from around the country, to participate in the event over Labor Day with the champion of each of these divisions earning the honor of participating in the International Super Group (2007s) and the DA Super Groups (2008 and 2009) over Memorial weekend, 2021.

Due to the rescheduled dates, teams will be playing based on 2020/2021 age groups and thus can now qualify in September and the same team can compete in the May 2021 event. More information will be forthcoming about these qualifying divisions.

“The Nexen Manchester Cup is one of the highlights in our youth soccer calendar and whilst we are disappointed to delay this year’s event, we look forward to hosting it later in the year when it is safe to do so. The health and wellbeing of our participants, staff and spectators is of paramount importance to the Club and on behalf of everyone at Manchester City, I would like to extend my best wishes to you and your families at this challenging time. We look forward to seeing you back on the pitch soon.”  Cristina Mora, Vice President, Americas.

“The health and safety of the players, coaches and families are our top priority and at this time we encourage everyone to Stay Safe and Stay Home, thus the decision to reschedule the event,” said Michelle Chesters Tournament Director, Surf Cup Sports. “While we all were looking forward to hosting this year’s event over Memorial weekend, the decision to move the event to Labor Day was the right decision. We look forward to hosting the event with Manchester City FC over Labor Day weekend and seeing all the teams back on the pitch soon,” added Chesters.